Englefield House will be familiar to many film buffs. It has featured in many very popular films and series, but it is the gardens that are the main attraction to most visitors, because they are readily available to the visitor.
The house was built sometime around 1550. It was altered considerably in the 1820s. The house can be visited, but only by arrangement and normally only by groups. The gardens, however, are always open.
The gardens rise above the house and the views from the highest point take in woodland, an impressive lake, and the surrounding deer park. The garden itself has different features appealing to most people, including children. 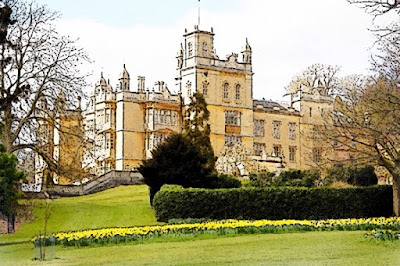 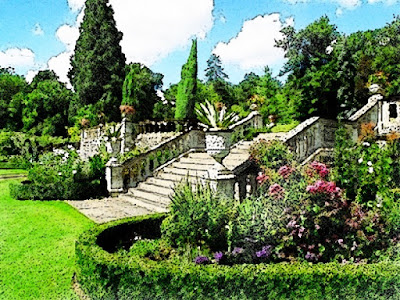 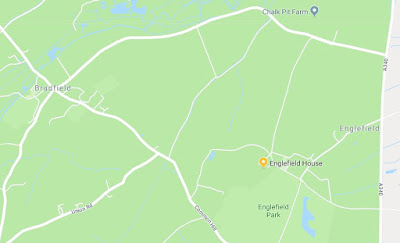 Sometime in the late 1850s it was decided to build a temple in the grounds, mainly as a summer house at the top and the final resting place on the lower floor.. However, the Duchess died in 1861, before the temple was completed, and so it was decided that the upper floor would become her mausoleum. 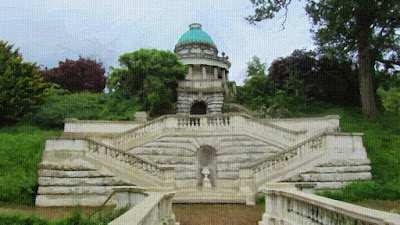 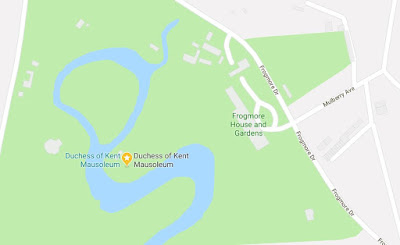 Douai Abbey, or at least its monks, have moved around more than just a little. The order was founded in Paris in 1615, under the patronage of the monks of Bury St Edmunds in Suffolk. Although based in France, most of the monks were English and most of the ministries were effected in England.
The French Revolution meant that the monks had to move from Paris, but they went to Douai, from whence their name. They began to teach young English boys, most of whom were destined for the priesthood.
Under the terms of the French Laws of Association, the Abbot and monks were expelled from France in 1903. They moved back to England, to Woolhampton in Berkshire and began to teach from there. The Douai  Abbey still administers eight parishes and retreats, but the school itself closed down in 1999. 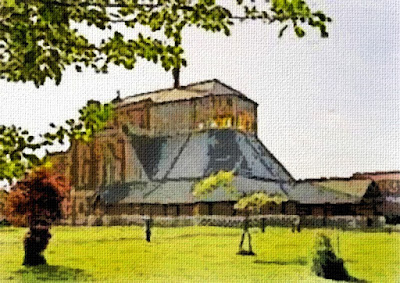 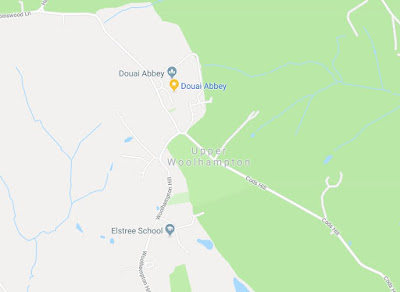 Being based in the Midlands, travelling across Britain was not an easy task in the days of the 1940s and 1950s, but we did occasionally make it down to the Cotswolds and the beautiful village of Bourton on the Water. One of my favourite places to visit was the model village, built to one-ninth scale and depicting the heart of the village as it was when the model opened in 1937. It took fifty years before I looked at another model village, and was surprised somewhat to find that Bekonscot in Beaconsfield is actually older, by a few short years.


Bekonscot, to be fair, actually started during the 1920s, but simply as a personal pleasure for the architect Roland Callingham. With the help of his staff and friends, he constructed a model town to represent life in England as it was just after WW1. To Roland the village was a plaything. To his guests it was a wonder to be shared and so, in the early 1930s, Bekonscot was thrown open to the public.


Since those days the village has attracted more than 14 million visitors. Since 1978 it has been run by the Church Army, which has resulted in more than £5 of the entrance fees being channelled into charitable causes. 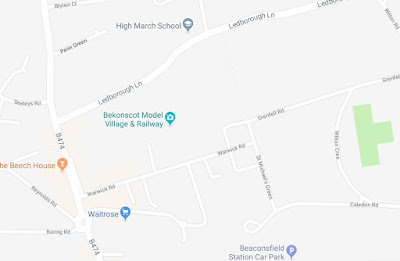 According to the Domesday Book, there were four mills in Stotfold some 1000 years ago. Now there is one, and that only because local volunteers decided the history was too great to lose after a huge fire destroyed the mill in 1992.


It is testament to those committed to the rebuild and refurbishment that the mill today reflects how it would have been 100 or more years ago, but that took around 14 years to achieve. 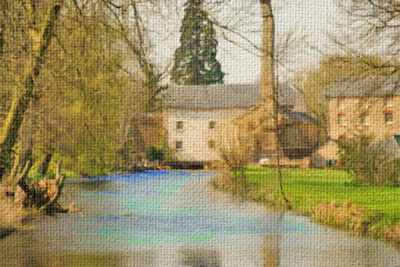 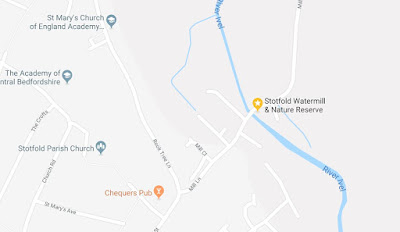 Even before Harry Potter and his Hogwarts Express there has been a long interest in the railways of yesteryear, when children stood on railway bridges or on platforms, taking note of the engine number or name of every passing train. The advent of diesels and electric took away the individuality of the engines, with many looking alike, apart from the nomenclature.


The Leighton Buzzard Light Railway is narrow gauge, and runs for just three miles, but there has been an interesting build up of old railway stock and the venue is very popular.


Built in 1919, just after the WW1, the railway was constructed to carry sand & gravel from local pits to the construction industry. That lasted until the 1960s. Faced with the closure of this little railway, local volunteers banded together, saved what was there, and then expanded the stock to the point it is at today. 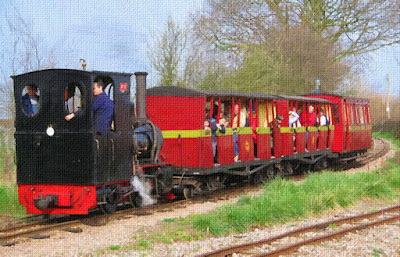 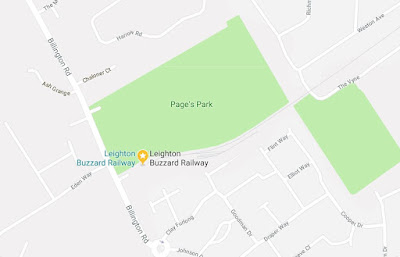 I think the official website tells you all you need to know:

The Manor House Garden extends to four and a half acres.
It has been developed and almost entirely looked after by owners Simon and Kathy Brown over the last thirty years.
To celebrate this great creativity they have published a garden guide called Painting with Nature
The garden has many different areas of interest
•formal garden with clipped jury,
•cottage garden with honeysuckle, rose and clematis pergolas,
•wisteria and laburnum walk underplanted with alliums
•various herbaceous borders,
•tree and herbaceous peony border, plus exciting new Intersectional Peonies
•major climbing rose displays for end June/early July followed by
•major clematis displays in July and August
•exuberant container garden displays with workshops/demonstrations***
•a dedicated edible flower border with themed classes/demonstrations***
•a wild flower meadow
•avenues of white stemmed birches, metasequoia, eucalypts and gingkos.
•a snaking winter garden
•a prolific orchard with themed classes***
•Three art gardens using naturalistic planting schemes, a fourth with living Rothko murals and a new room inspired by Henri Matisse's The Red Studio which Rothko so much admired.

You have the basis for a real treat whatever the time of year you might choose to visit.

The Edible flower border has lots of tasty flowers according to the season.....sweet ciciley, bonze fennel flowers with pink, white and blue lavenders, daylilies, marsh mallow, bronze fennel, dianthus, pink thymes and marigolds! Lavender and lemon drizzle is one of my most popular cakes, but raspberry and elderflower is even better! Lavender flapjacks with lots of seeds and dates are excellent too. Carrot and marigold cake has now become one of my late summer favourites whilst a classic Victoria sponge (photo) with strawberry and rosewater jam partnered with rosewater cream is brilliant!  My Tuesday afternoon visitors enjoy different ones each week! Group visitors can arrange demonstrations on edible flowers.
https://kathybrownsgarden.homestead.com 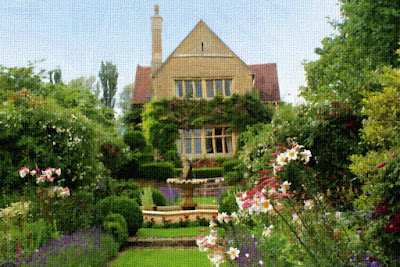 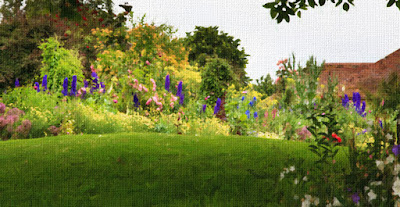 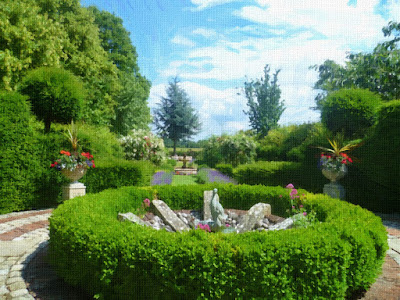 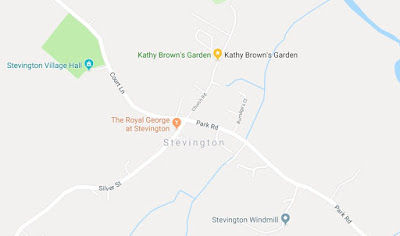 King Henry VIII has a lot to answer for, not including head counts. His Dissolution of the Monasteries destroyed much of England's heritage. Many once beautiful places are now just ruins.


Not so Elstow Moot Hall.


Elstow Abbey was established in 1078 and became one of the richest orders of nuns in Europe. The Abbey prospered and the grounds were expansive, so the Moot Hall was built in the 15th Century, originally in wattle and daub.


Less than 100 years later came King Henry. The hall was lost to the abbey, for which it had been acting as a court house. It was built more solidly and became a market house for the village.


Elstow had a famous son. John Bunyan came from close by to the hall, and his Pilgrim's Progress is still read today. Thus the hall became a museum, with much commemoration of Bunyan, amongst a good many other things. 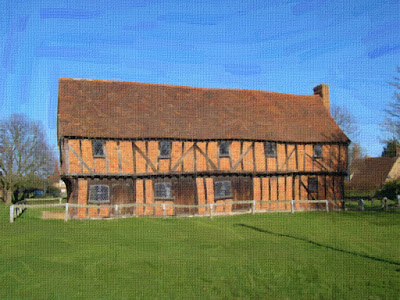 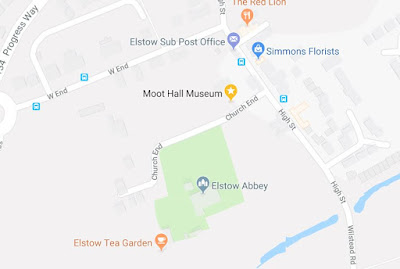 England doesn't really do mountains. Dunstable Downs are the highest point in Bedfordshire, at less than 1000 feet. Yet, they are a definite Area of Outstanding Natural Beauty (AONB). Rising and falling over a large area of chalk grasslands, with the occasional wood as a diversion, the Downs are home to wildlife, wild flowers, and fresh open spaces.


Managed by the National Trust, there are a lot of activities throughout the year, and there are downloadable walks to suit every kind of outdoor enthusiast. May brings a burst of colour as a variety of wildflowers and wild orchids spring up, sometimes in profusion. 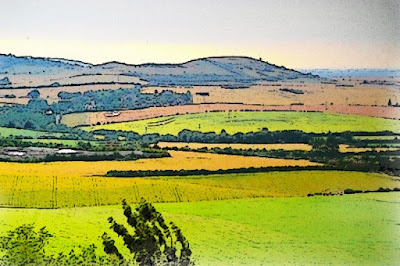 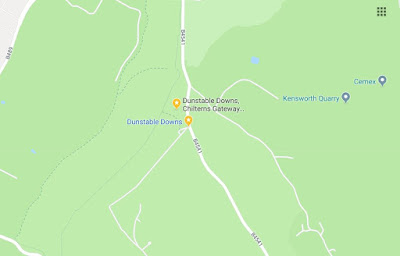 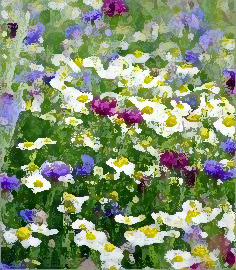 May at Dunstable Downs

Also known as Cardington Hangars, No 1 Shed began life in 1915. The land was bought by the Shorts Brothers, and they established Shortstown to house their workers. The object at that time was to build two airships, The R-31 and R-32.


With successful trials behind them, the Royal Air Force looked at the project, which then became the Royal Airship Works. The Number 1 Shed had to be raised to 170 feet and lengthened to 812 feet in order to accommodate the R101.


This was successful and highly impressive for a while, and that brought in Shed No 2, which was relocated to Cardington in 1928. Everything seemed set for great expansion, but then came the disastrous demise of R101, and that put an end to airship building in Britain.


That was not the end of Cardington. In 1936 and 1937 the hangars became the production base for Barrage Balloons. Then from 1943 to 1967 it was used to house and produce Meteorological Balloons, and it is still used today for Meteorological Research. 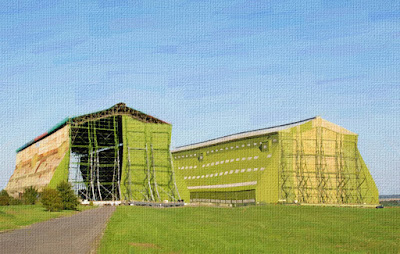 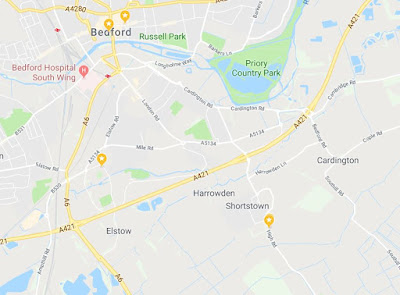 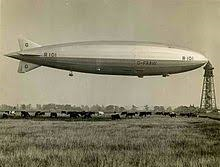